Josh began collaborating with TNACI in September 2013 and permanently joined the staff in April 2014. He has worked on several threatened and endangered tortoise species, and continues to conduct conservation research on Map Turtles and other turtle species in the southeastern United States. In 2010, he described a new freshwater turtle species, Pearl River Map Turtle (Graptemys pearlensis), from Mississippi and Louisiana. In collaboration with Southeast Missouri State University and Sewanee, he has initiated research aimed at understanding headwater communities.  Besides turtle and salamander research, he is also interested in the impacts of utility-scale renewable energy developments on terrestrial and aquatic vertebrates. Josh is an associate editor for Chelonian Conservation and Biology. 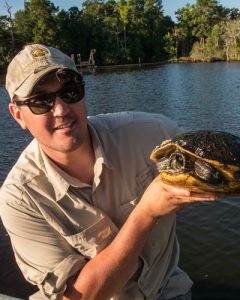 Favorite Saying: “Is that dumb?”