Shawna’s interest in conservation started when she was 10 years old and saw an ad in National Geographic for the Save a Manatee Club. She “adopted” an endangered manatee from her home in upstate New York and for years contributed to the efforts to save the manatees down in Florida. She was an intern with TNACI during the summer of 2014 and was hired as a full time science coordinator in August 2015. Shawna helps to advance TNACI’s freshwater conservation science mission by organizing field studies and coordinating research with partners and other external scientists. She conducted undergraduate research on the restoration of gilt darters into New York’s Allegheny River. This research introduced her to the world of conservation aquaculture. She also worked on studying the diet of Paddlefish that were being raised in ponds in New York State. 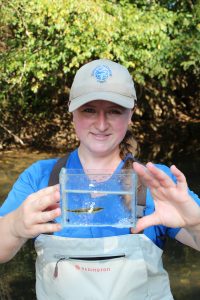 Most Exciting Thing about Living in the South: Short Winters!

I Am Afraid of: Dolls and Mascots