Every year, mankind produces about 300 million pounds of plastic, less than 10 percent of which is recycled. Much of that material lingers in landfills or is blown or washed into waterways, where it eventually makes its way to the ocean.

This summer, more than one dozen artistic installations of aquatic animals made from recovered plastic debris will be exhibited throughout the campus of the Tennessee Aquarium and IMAX 3D Theater.

Look for these animal sculptures on your next visit:

Access to view Washed Ashore artwork installed in the Aquarium is included with Aquarium admission. Works installed outside the Aquarium may be enjoyed for free.

Plastic litter is more than just an ocean problem. According to the Tennessee Department of Transportation (TDOT), at any given time, there are more than 100 million pieces of litter on Tennessee’s roadways, which can pose a threat to both land and aquatic animals.

TDOT initiated the Nobody Trashes Tennessee campaign and is partnering with organizations like the Aquarium to actively engage people to join in an anti-littering push that will greatly benefit our natural treasures. By supporting the Washed Ashore exhibit, Aquarium guests will be captivated by the colorful creatures during their visit and then head home to consider ways they can join the effort to improve the environment.

In addition to the works created by Washed Ashore, guests exploring the Discovery Hall gallery on the third floor of the River Journey building will encounter a sculpture of a Southern Appalachian Brook Trout. This enormous work was made by Aquarium employees out of plastic items collected internally last summer and fall.

The Washed Ashore exhibit is presented by the Tennessee Department of Transportation’s Nobody Trashes Tennessee litter prevention campaign with additional support from Unum. 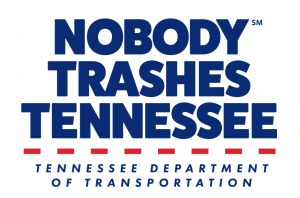